1.1 Presentation and definition of the footwear market

The primary function of shoes is to protect the foot. However, footwear is also a fashion accessory, responding to a logic of renewal other than the simple functional use until the shoe wears out. The footwear market covers all types of footwear, those worn daily and those used for a specific activity.

There are several categories of footwear, according to the French Footwear Federation:

However, the lines are becoming increasingly blurred, especially between athletic and casual footwear, due to the advent of sneakers as everyday footwear.

The sector has to adapt to the digitalization of the market, which has pushed the main players to invest massively in online tools. Currently, the existing brands have to face pure-players to impose themselves on this growing segment.

1.2 The global market is growing strongly

The chart above shows the trend and forecast for footwear sales by value (***) over the period ****-****. The market is growing fairly steadily over the period.

The forecast shows a steady growth trend in footwear sales through ****, with a market value of ...

The graph above shows the evolution of footwear production in France in terms of value (***), we arrive at aFrench market value of just under * billion euros.

Main countries of destination for footwear exports France, ****, in millions of euros Source: ****

Total French footwear exports in **** amounted to €*.* billion. They are heavily concentrated towards * European countries, namely Italy, Germany and the United Kingdom, with respective export values ...

1.5 The impact of Covid-19 on textile markets: clothing and footwear in difficulty

The Covid-** crisis has had a strong impact on the ready-to-wear market in general (***). Due to the containment and decline in store traffic, the turnover of specialty retailers was divided by * between April **** and April ****.

According to a **** survey conducted by YouGov, women make up the majority of customers in the French footwear industry. Indeed, it is estimated that a woman buys about * pairs of shoes per year, while a man buys three and a half. [***]

Sales are largely dominated by women's shoes, accounting for **% of ...

The histogram above illustrates the average annual budget French women allocated to shoe purchases in ****, by age. On average, French women spend around €*** per year on shoes, compared to a higher budget of almost €*** for women aged **-**.

2.3 The evolution of purchasing criteria

This histogram shows the top purchasing criteria of French women when buying shoes in ****, by age group. French women aged **-** were about **% more likely to prioritize comfort over aesthetics or price, while most women aged **+ cited comfort as their top purchase ...

The explosion of running shoe sales in recent years can be attributed to two distinct trends:

The perception by a portion ...

2.5 Millenials, the main driver of demand for trainers in France

The French sneaker market grew by *% between **** and **** to reach a value of over €* billion. It now represents **% of the French footwear market (***). An estimated *** brands have entered the market in the last five years.

The sneaker brand with the highest ...

3.1 The main players in the sector

Market share of the main companies in the footwear market France, ****, in percent Source: ****

The footwear market is mainly composed of industry giants, as illustrated in the chart above. Indeed, Nike and Adidas logically lead the market. These two companies are closely followed by Decathlon and all its brands.

3.2 Footwear distribution in the country

The Auvergne-Rhône-Alpes region has the largest number of stores in the region with no less than *** shoe stores in ****.

Although it is the region with the most stores, for the French Footwear Federation, the leading French production region is New Aquitaine. Finally, the other ...

As shown in the chart below, the main distribution channel for footwear in France in **** is sports stores, with over a quarter of the market (***).

It should also be noted that online and distance sales represent **% of the total French distribution. Logically, food superstores are the least used distribution channel for ...

3.4 The development of the online market

Companies providing only "online" shoes without a physical store accounted for **.*% of shoe sales in ****. Three pure players dominate the market: Sarenza, Spartoo and Zalando.

To compensate for the absence of physical stores, these brands offer a wide choice online, combined with a low price policy. Additional services have also been ...

There are several categories of consumer footwear. The footwear market can be segmented on the basis of product usage:

Leisure and recreational footwear:these shoes can be covered with leather, synthetic materials and rubber or fabric. There are many different models, depending on gender and use (***) They are usually marketed by ...

The manufacture of a shoe includes three main stages which are the manufacture of the upper, the assembly (***) and finishing according to the model of the shoe French Federation of Footwear. more precisely :

Manufacture of the upper: first of all, the shoe is designed and the shape is modelled. The different ...

Casual and "leisure" footwear were produced in France in ****, which is not surprising since these are the most frequently worn shoes. In fact, about one out of every two pairs of shoes produced that year (***) was a pair of shoes in this product ...

4.4 Prices of the different products

4. The 5 most ethical brands: sustainability and made in France

The "Made in France" trend, confirmed by a **** CREDOC study [***], is also affecting the footwear sector, with an increasing diversity of products The hexagonal factory offers us a guide to "Made in France" shoes. This trend seems to affect more male consumers. The mid to high-end market is well represented in ...

The Prodcom list is a product nomenclature used by the Member States of the European Union to compile their production statistics. The Prodcom codes are *-digit codes, the first four of which correspond to the activity classes of the NACE-BEL **** classification. The first six digits of the Prodcom code ... Inclus dans ce pack: This study (The footwear market - France) + 4 other studies of your choice 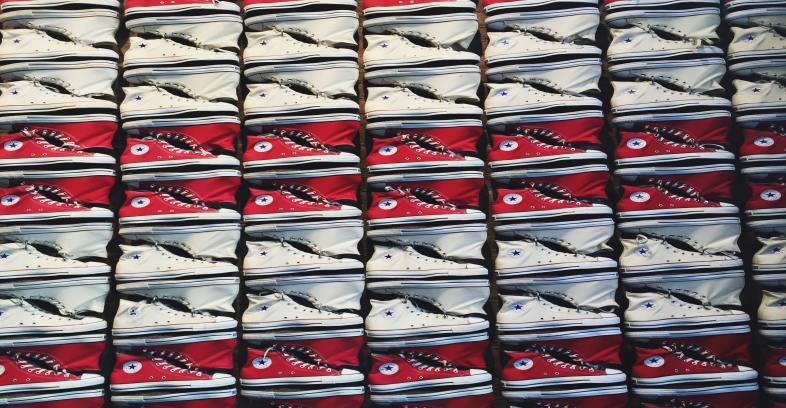